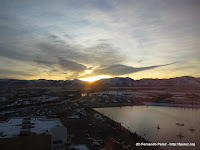 In what's becoming a bit of a tradition, Simula's Hans-Petter Langtangen, U. Washington's Randy LeVeque and I co-organized yet another minisymposium on Python for Scientific computing at a SIAM conference.

At the Computational Science and Engineering 2011 meeting, held in Reno February 28-March 4, we had 2 sessions with 4 talks each (part I and II).  I have put together a page with all the slides I got from the various speakers, that also includes slides from python-related talks in other minisymposia.  I have also posted some pictures from our sessions and from the minisymposium on reproducible research that my friend and colleague Jarrod Millman organized during the same conference. 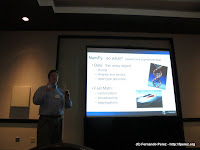 We had great attendance, with a standing-room-only crowd for the first session, something rather unusual during the parallel sessions of a SIAM conference.  But more importantly, this year there were three other sessions entirely devoted to Python in scientific computing at the conference, organized completely independently from ours.  One focused on PDEs and the other on optimization.  Furthermore, there were scattered talks at several other sessions where Python was explicitly discussed in the title or abstract.  For all of these, I have collected the slides I was able to get; if you have slides for one such talk I failed to include, please contact me and I'll be happy to post them there.

Unfortunately for our audience, we had last-minute logistical complications that prevented Robert Bradshaw and John Hunter from attending, so I had to deliver the Cython and matplotlib talks (in addition to my IPython one).  Having a speaker give three back-to-back talks isn't ideal, but both of them kindly prepared all the materials and "delivered" them to me over skype the day before, so hopefully the audience got a reasonable simile of their original intent. It's a shame, since I know first-hand how good both of them are as speakers, but canceling talks on these two key tools would really have been a disservice to everyone; my thanks go to the SIAM organizers who were flexible enough to allow for this to happen.  Given how packed the room was, I'm sure we made the right choice.

It's now abundantly clear from this level of interest that Python is being very successful in solving real problems in scientific computing.  We've come a long way from the days when some of us (I have painful memories of this) had to justify to our colleagues/advisors why we wanted to 'play' with this newfangled 'toy' instead of just getting on with our job using the existing tools (in my case it was IDL, a hodgepodge of homegrown shell/awk/sed/perl scripting, custom C and some Gnuplot thrown in the mix for good measure).  Things are by no means perfect, and there's plenty of problems to solve, but we have a great foundation, a number of good quality tools that continue to improve as well as our most important asset: a rapidly growing community that is solving new problems, creating new libraries and coming up with innovative approaches to computational and mathematical questions, often facilitated by Python's tremendous flexibility. It's been a fun ride so far, but I suspect the next decade is going to be even more interesting.  If you missed this, try to make it to SciPy 2011 or EuroSciPy 2011! 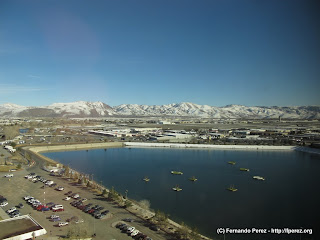 Email ThisBlogThis!Share to TwitterShare to FacebookShare to Pinterest
Labels: scipy

Well, from the photos I can see that you were impressed by Reno's countryside, just like I am always! Reno is a great place to live. :)